We leave our AirB&B apartment in Reykjavik around 10am and head to Gullfoss, 90 minutes and 113 kilometers to the East. Iceland has no shortage of guesthouses and hostels that offer accommodations at a reasonable rate, but all I pictured was sharing a bathroom with a drunk 20-something tourist who has inconveniently passed out on the toilet at 2 am or having to make small talk with an overly-friendly retired couple from one of the square states who, after telling us all the tours they had been on, insist on showing us photos of all of their grandchildren. Basically, hostels are an introverts version of Hell and I just couldn’t do it, so we rented a few apartments around the island instead.

Gullfoss, or gold falls, is located along route 1, also known as ring road as it encircles the entire island. It is an incredibly popular waterfall in the country, I’m guessing due to its proximity to the capital and its easy access. We pull into the crowded parking lot at breakneck speed, flooring it to beat other motorists to the one remaining spot, narrowly missing pedestrians and a few bumpers. Throngs of people are pouring off tour busses, one of which was driven by a man that I can only assume is directly related to one of the Norse Gods. He turns slightly sideways to fit his broad shoulders through the bus door frame, his blonde hair cascading past his shoulders. I bet the dashboard of the bus is adorned with the skulls of his adversaries and his winter coat is made of pelts from animals he hunted and caught with his bare hands. I’m sure his name is Gunnar or Thor or Erik with a K.

We first stop at the bathroom where you have to pay to go through the turnstile to get to the bathrooms on the other side. There is a change machine that converts Icelandic krona bills into coins. I deem the coins “bathroom tokens” because I have yet to use them for anything else. I mean to put in the 1,000 krona bill but get confused and put in 10,000 instead. I end up having to use both hands to catch the coins spewing from the mouth of the machine. I turn around and realize I could have just paid with a credit card. Figures. 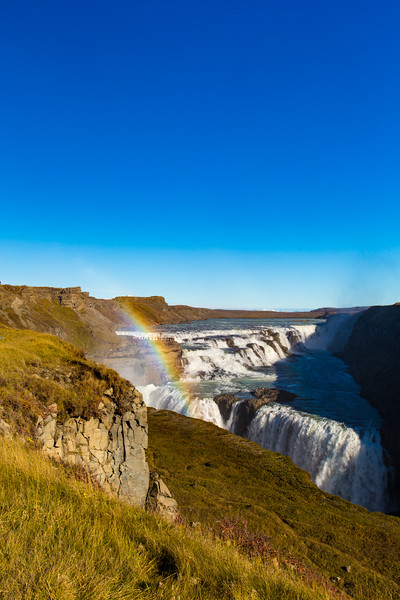 Following the crowd down the boardwalk, we descend a set a stairs to get closer to the waterfall. A rainbow arcs out of the cloud of mist at the water’s base, a dramatic introduction to an impressive falls. Before we even arrived, we had agreed to stay in the area until after nightfall, hoping to catch a glimpse of the Northern Lights yet again. As we walk along the trail to the top of the falls, I scout out spots along the rail that offer the best angles. Gullfoss is gorgeous, but the sheer number of people standing, selfy-ing, and touring is too much for me. We hike back up the hill and climb the stairs and for the first time on our trip, I’m sweating. After a lunch of the best white asparagus soup I’ve ever had, I spend $100 in the gift shop, and get back in the car to spend the rest of the afternoon exploring the area.

We drive through small towns, discover a beautiful park next to a church, and explore an eco-village that practices organic subsistence farming. The sun sets and we head back to Gullfoss, now abandoned save for 3 or 4 people with the same idea we have. I put on my sweaters, my jackets, scarf, hat, and gloves and grab my tripod from the back of the SUV. Just hours ago I was sweating, but now as I stand in the fading daylight, wind blowing off the waterfall and spraying me and my equipment with frigid mist, I question how long I’m going to be able to stand out here. Aaron runs back to the car and brings me two more jackets. I try to smile but my chapped lips and wind burned cheeks stop me. I set up the camera on the tripod and adjust my settings. A molasses-slow shutter speed, largest aperture my lens will allow, ISO at 3200. Multiple exposures. Manual mode. Focused on infinity. To photograph stars, you have to focus on infinity. I find this beautifully poetic.

I wipe the mist from my lens with a folded polishing cloth like a mother lovingly wiping the nose of her child. In front of me, Gulfoss roars- deafening, violent, invisible. The moonless night sky offers little help in illuminating my subject. I look up and see glittering stars and the tell-tale milky bands of the Northern Lights, not yet shining green or purple or blue. I depress the button on my camera and slowly step back before the timer releases the shutter, so as not to jostle the camera in any way. And then I wait. First click. That's thirty seconds and a dark exposure. I stand as still as possible and will my body not to shiver. The tripod and camera sensor can pick up the tiniest vibrations and cause a blurry photo. Second click. Medium exposure. Another 30 seconds. I bury my chin in my scarf and shut my eyes, the icy spray from the falls assaulting what little skin I still have exposed. Third click. Light exposure. Last 30 seconds. I spend it hoping this 90 seconds wasn't a waste of time. The preview blips onto the LCD screen, cutting through the darkness and teasing a glimpse of the outcome. I press the review button and stare in amazement at the image of Gulfoss, shining white under billions of shimmering stars and the faint blue and green of the Auroras. There are better images out there, surely. With sharper stars and brighter falls. But I'm proud of this image for the technical challenge it presented and the knowledge of exposure and shutter speed I had to apply to capture it. It took several tries and a few freezing nights, but I'm happy with my result.