Originally I had envisioned presenting this project in complete sets, displaying the adjective, noun, and verb each contributor gave me. But as I slowly work through this project, I realize I don't have the patience for that. I'm checking the words off my list as the opportunity presents itself to me.

This project has been a welcome challenge, as it has forced me to take my camera with me everywhere I go and to explore new places. For example, I was given the noun 'book' and I plan to capture this image at the Library of Congress, a place I may not have otherwise opted to go.

A huge thank you to everyone who contributed a word or set of words. It has been tremendously refreshing to think outside the box.

Southern California has been gripped by drought for years. In this photo, downtown L.A. is flanked by the parched landscape. We had hiked down into a canyon and the trail was the consistency of baby powder. The dust particles wafted in the desert air and stuck to our teeth. It's impossible to drink enough water here.

I'm not a huge fan of squirrels, but you can't help but love this little guy's yellow-toothed smile. He was clearly accustomed to humans and I was a little afraid he was going to climb up my leg.

I included 2 photos for this one because I love birds. The first is a black phoebe (Sayornis nigricans), found in the Western U.S. and Central America. All phoebes are part of the Flycatcher family, a family of birds that most birders would agree are hard to tell apart. Black phoebes live near water, so as long as there is water present and some kind of ledge or overhang on which to anchor a mud nest, Black Phoebes could be around.

The second is a yellow-rumped warbler (Setophaga coronata), also known as a Butter Butt for the yellow spot at the base of its tail. They are found all over the U.S., spending the winters in the southern U.S. and Central America and summering in the Western U.S. and Canada.

What's funny is, I took that photo of the yellow-rumped warbler and even I have trouble finding him. I almost deleted this picture off the blog because I thought I had accidentally posted a photo of twigs. He is so camouflaged among the American Sycamore leaves. Can you spot him?

The emerging leaves of a tiny Liriodendron tulipifera: the tulip poplar. A misnomer since it is neither a tulip nor a poplar. Part of the magnolia family, the tulip poplar is the tallest of the eastern hardwood trees. In spring, they produce a very tropical-looking flower. It's my favorite tree, mainly because I like saying the latin name and it is the easiest for me to identify.

I have no idea what the hell plant this is. Something that can withstand the Southern California drought, I'll tell you that much. I ran my hand over the outer edge, as if I wasn't convinced by its appearance that it would be prickly. I immediately withdrew as the sharp barb threatened to lodge itself into the flesh between my thumb and forefinger. 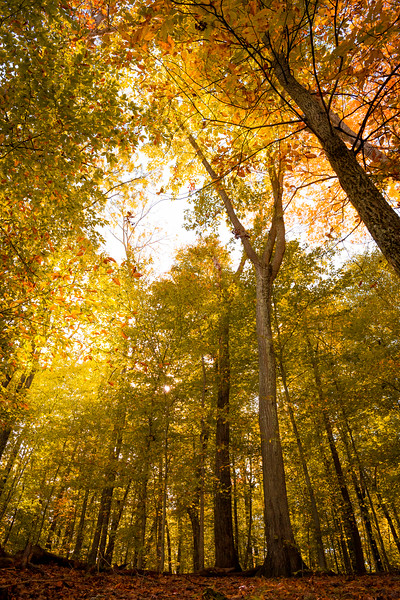 Is there a difference in connotation between forest and woods? I was on the fence about posting this one. I guess I think of a forest as being isolated, remote, and densely populated with trees, whereas woods would be any patch of land with trees growing on it. If so, then this photo is of the latter and I'll need a redo on the forest. In the meantime, this one is pretty and peaceful.

On to my next set of words, to include confess, believe, demand (the verbs have been the hardest), algorithm, symbol, book, fragile, and protective.